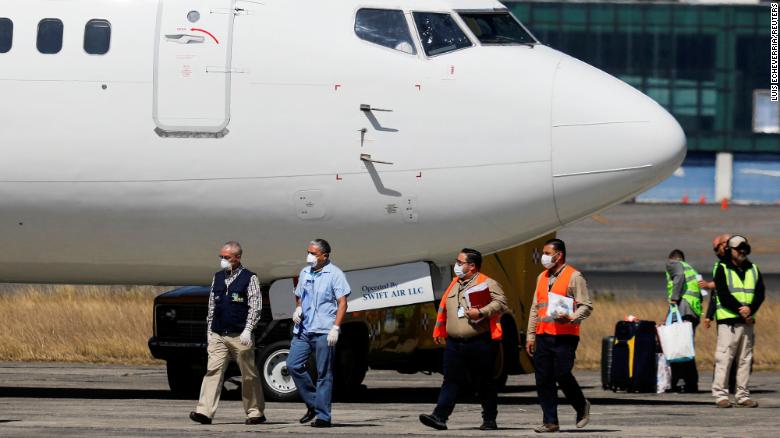 A Guatemalan man who was deported from the United States last week has tested positive for the novel coronavirus.According to Guatemalan health and migration officials, the man arrived in Guatemala on Thursday on a deportation flight from Mesa, Arizona. He was asymptomatic at the time, but two days later began presenting symptoms and subsequently tested positive for the virus, the officials said.It appears to be the first reported case of someone deported from the United States with coronavirus — a possibility that advocates had been warning of for weeks.13 changes to the US immigration system during the coronavirus pandemicThe man has been hospitalized in Guatemala CIty, officials said. Forty others who were on the deportation flight with him are being quarantined at home.Some who favor restricting immigration in the United States have suggested accelerating the pace of deportation flights in response to concerns about the virus spreading in ICE detention facilities.Immigrant and human rights advocates have been warning for weeks that deportation flights from the United States, the country with the largest number of known coronavirus cases, could hasten the spread of the virus in other nations.”It is as predictable as it is horrifying. … It was just a matter of time that this would happen,” Charanya Krishnaswami, Amnesty International’s advocacy director for the Americas, told CNN on Monday.Detained immigrants are at high risk for contracting coronavirus, she said, given the conditions in ICE detention.”The US, by ceasing to halt the deportation machine, is exporting that virus to countries that are much less well equipped to deal with it than even we are,” she said.Guatemalan officials say 36 cases of coronavirus and one death have been confirmed in that country. More than 159,000 coronavirus cases and more than 2,900 deaths have been confirmed in the United States, according to CNN’s count.The coronavirus pandemic has grounded thousands of planes and left airports looking like ghost towns. But US deportation flights have continued.Earlier this month, Guatemala temporarily suspended deportation flights from the United States amid concerns over the pandemic. The flights resumed days later.A group of Guatemalan organizations last week called for the Central American country’s government to push the United States to suspend deportations in the coming weeks and to “ensure the protection, attention and access to health care for people who are in detention centers.””This is a fear a lot of groups have had, particularly in Central America and Guatemala, of the fact that the coronavirus could be exported to their countries through deportations from the United States,” said Maureen Meyer, director for migrant rights at the Washington Office on Latin America. “In a country like Guatemala, you have one of the poorest countries in the region. You have parts of the population that are very isolated. And a virus of this magnitude could just really devastate communities.”Immigration and Customs Enforcement did not immediately respond to a request for comment.ICE Air: How US deportation flights workThe agency’s coronavirus website indicates temperature screenings are conducted before detainees board deportation flights.”Any detainee with a temperature of 100.4 degrees or higher will be immediately referred to a medical provider for further evaluation and observation,” the website says.ICE Air, the division of Immigration and Customs Enforcement that handles deportation flights, generally removes immigrants from the United States on both charter and commercial flights. The White House recently asked Congress for funding for additional chartered flights.”With fewer commercial flight options, ICE charter aircraft are needed to continue repatriating aliens ordered removed and reduce the need for additional beds,” its recent budget request said.US officials don’t appear to be scaling back deportations. In fact, officials now say they’re swiftly deporting migrant children who previously would have been transferred to US custody after crossing the border.The US is swiftly removing migrant children due to new coronavirus restrictionsAnd as of Monday morning, deportation flights from the United States were continuing to arrive in Guatemala.The aircraft generally are packed when they fly to Central America, but return to the United States without passengers aboard.That changed last week, when ICE teamed up with the State Department to bring hundreds of stranded US citizens back from Central America on returning flights.